First pass at a transcription of the miscellaneous index

The following is a quick transcription of the index pages I posted earlier today for the Miscellaneous Documents found at the end of the Insanity Record Microfilm.  I'm sure I could resolve most of my question marks by going to the actual page mentioned in the index, but I wanted to put this out here quickly.  Don't think that the only names mentioned on the document pages are the ones mentioned in the index.  One has a wife renouncing the will of her deceased husband, and there are names and death dates on the actual page.  Other people are mentioned as members of companies or as spouses.  When I post the scanned pages, if I have time, I might post names mentioned in each page as it's posted, but school starts again Wednesday, so time will become very short until June.  Remember the actual scanned index pages are available at:  http://bit.ly/Wgvi0v  and I'll be posting the actual document pages referenced in the index over the next few weeks.

Error slide that the stating that the D/E and E/F index pages were rescanned.

Index I
I.C.R.R.Co to Ozark Cooperage and Lumber Co 295

Posted by Deb at 7:07 PM No comments: Links to this post 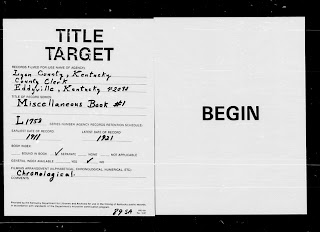 Doesn't seem like it's been three years since I posted the transcripts of the Lyon County Lunatic/Insanity records.  Time flies. I discovered, at the end of that process, that there were about 284 non lunatic (miscellaneous) records at the end of the microfilm and I promised to post them.  Instead of transcribing them, I've scanned them all in and will be posting them as I "pretty them up".  I've posted the first 35 (mostly) double pages which contain the table of contents (which they call an index).  I posted them in the original resolution, so you should be able to download any pages that interest you.  The pages are already scanned, so it shouldn't take me long to clean up and post the pages a few at a time.  If there were any original pages from the previously transcribed insanity records records for which you'd like a copy, I have those scanned also and would be happy to email you whichever page(s) you'd like.  You can find the first of the scanned miscellaneous records here:  http://bit.ly/Wgvi0v

Posted by Deb at 12:06 PM No comments: Links to this post