Moving from GEDMATCH to GEDMATCH/GENESIS

I'm doing a few presentations this year on DNA.  I'll be doing three presentations for the GSCCA (Genealogical Society of Craighead County Arkansas) in Jonesboro Arkansas (Beginning DNA, What to do with the results of your DNA test, and Advanced DNA Tools).  I'm also doing the second hour of Let's Discuss It this Saturday at the Tennessee Genealogical Society and will be doing a quick look at the transformation from GEDMATCH to GEDMATCH/GENESIS.  I'm posting the one page handout so the blog links can be available for attendees.

GEDMATCH/GENESIS is a FREE site for uploading autosomal DNA from many different testing companies with the ability to compare SNP data.  This is especially useful for AncestryDNA testers as that site does not provide segment location data with its reported results.  On the tools at GEDMATCH/GENESIS you also have the ability to adjust many reporting thresholds for your matches.

GENESIS is the rebirth of GEDMATCH providing matching for many more testing companies and chips than GEDMATCH handled previously.  GEDMATCH has not yet gone away, but all DNA kits which had been uploaded to GEDMATCH have been ported to GENESIS.  Any NEW uploads will be made to the GENESIS site.  To make things a little confusing, at the moment, any NEW ACCOUNTS will be created on the GEDMATCH site.  Several tools on GENESIS are labeled as Beta and may change as the company tweaks its new site.  The tools at GEDMATCH still function, but no new kits for comparison are added there.

The CURRENT process for using GEDMATCH/GENESIS is to:
1.  Download your raw autosomal DNA data to your computer in ZIP format from AncestryDNA, MyHeritage, 23andME, FTDNA or other DNA testing companies.  Each company provides directions for doing this.  If you don’t see the menu item, use the HELP facility at your testing company. [If you’re a MAC user, set default to NOT unpack ZIP files.]
2.  Create an account at GEDMATCH.
3.  Login to GENESIS
4.  Upload your ZIP file to GENESIS.  You can upload multiple DNA files (for multiple people) in one account.
5.  Wait a couple of days until the matching is complete (there is an icon indicating completion on GENESIS).  While waiting you might read the links above and the HELP files at GEDMATCH/GENESIS.
6.  After your wait, login to GENESIS and begin using the tools, upload a GEDCOM file and assign the point person in your GEDCOM file.
7.  Any password changes you wish to make still need to be made on the GEDMATCH site, currently.

There is another part of GEDMATCH/GENESIS that you will see called TIER ONE.  This is a section of additional tools that are part of a PAID section.  The cost is $10 per month.  You can purchase as many or as few months as you’d like.

Things you can do on GENESIS:


Posted by Deb at 8:13 AM No comments: Links to this post

These links will be useful to those who have attended the DNA Part 1 Class on Choosing a DNA Test.  While you're waiting for your ordered test results to be available, read, read, read.

HINT:  After you have ordered your DNA kit and before you receive your results, log in to the company from which you ordered the test, read the FAQ and Help files and tutorials.  Also create or upload your tree to the site and set up your profile for the site.  After your DNA results are available, LINK your DNA to your name on your tree.  Now comes the hard work, analysis AND fun!

YouTube has MANY videos on Getting Started with DNA Research
Example: Do a search on YouTube for  DNA Bettinger or search for DNA genealogy, you'll see several interviews and classes by Blaine Bettinger and useful videos.

Posted by Deb at 10:13 AM No comments: Links to this post

A vintage pop-up Valentine sent to my mother, when she was a little girl. I don't know the date, but she was born in 1921, so it was probably sometime in the 1920's. The back says to: Geneva. from: Aunts. The aunts are probably Aunt Fannie, Ivey and Billie Cummins, sisters of my mother's mother, Mary Cummins Gray. The aunts lived together in their later years and earned a living by running a boarding house in Old Eddyville Kentucky. 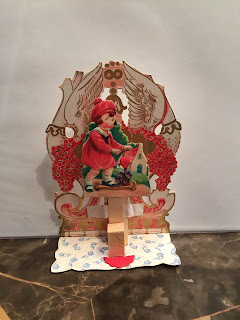 Posted by Deb at 11:55 AM No comments: Links to this post

#52ancestors - In The Census

I learned SO many interesting things from the U.S. Census records, but I'll make this a short entry.  Elizabeth Jones married Willard C Town in 1840 in Caldwell County Kentucky.  He died in 1847.  I had found her in the 1870 census, living with her oldest son and still showing her married name, Elizabeth Town, so it was a shock to find her, with her children, living with Samuel Pearce and going by the name Elizabeth Pearce in the 1860 census.  A trip to the courthouse was needed.  Sure enough, she had married Samuel Pearce in 1859, but they divorced on Tuesday the 9th of June in 1868 by petition of Samuel.  Sure would like to know more.....   Genealogy is such a wonderful mystery trip!!!

Posted by Deb at 8:15 AM No comments: Links to this post

#52ancestors - Who would I have liked to invite to dinner

This is the next installment of the #52ancestors challenge.  I'm supposed to decide which of my ancestors I would have loved to have had to dinner.  Since I'm a "gimme data" type of person, it would have been to grill the ancestor who could answer my most pressing brick wall questions, but there are others that I would have loved to invite to just listen to their life's story.

So many things I'd want to know.  So little time at a dinner.

I would have loved to talk with Willard C Town.  He was my first ancestor to move to Kentucky.  He arrived before 1840.  In 1830, in Ohio, his dad, Willard Oliver Town, left home and "headed west", never to be heard from again.  I would like to know about that.  What was his dad's reason for heading west?  Many questions.  I knew nothing about Willard C Town until I started researching my family in 1977.  He was my Second Great Grandfather.  HIS fourth great grandfather was the brother of two women hanged for being witches in Salem MA.  Did Willard C know this?  Were they better at handing down family info than our current generations?  My Willard C was born in Vermont, but moved with his parents and siblings to Ohio before he moved to Kentucky.  The family of witches was in MA and then in VT.  Maybe he knew.  The fifth great grandfather of Willard C Town was our immigrant ancestor from England.  I would love to know what Willard C knew.  I'd love to know what his trip was like from Vermont to Ohio.  Why did he move to Kentucky?  He married in 1840, not long after his arrival.  He did in 1847.  He was about 43 years old.  I don't know how or why he died.  He left a wife and two very small sons.  I want to know everything and I know so little.

I would also have liked to talk with David Bigham, whose father was born in Ireland.  What did he know about the trip by ship to North/South Carolina from Ireland.....

I would love to hear about the life of Beulah Chittenden, my fourth great grandmother.  She was the daughter of  Thomas Chittenden, who was the first governor of Vermont.  She married Elijah Galusha, who died at the age of 23, in a sawmill accident.  He had served in the Revolutionary War.  She then married Mathew Lyon, who became a representative from Kentucky and the first person in this country to ever be charged with sedition.  They moved to Eddyville Kentucky, from Vermont. What was her life like?

I would love another chance to sit down with my own grandparents and ask them the questions I never asked as a child and very young woman.

Other questions:  A second great grandmother had 15 children, losing the first four as very young children or infants.  What was her life like?

Can't wait for that time machine to be invented.
Posted by Deb at 2:14 PM No comments: Links to this post